I recently had a report from the female prisoner about whom I posted in late October.  When I last corresponded with her, I recommended that, since her photos were so promising, that she be photographed wearing a pretty dress outside.

Of course, I acknowledged that as a prisoner, she would be required to be locked up in transport shackled and taken in a secure vehicle from her facility to say, a public park, where the photographs would be taken.

I didn’t hear back for a while, but I was a bit surprised at what I heard.  She requested that the photographs be taken of her, and her owner rejected her request.  Since her request was based largely on my suggestion, I couldn’t help but feel a twinge of guilt.

Apparently, she was sentenced to a regimen of punishment for  week after her infraction.

That punishment has already been served, and apparently it went this way.

This woman was required to pass seven full nights in the following restriction.  She was stripped nude, and diapered and was dressed in a clear cellophane plastic raincoat, buttoned from her throat down to her ankles.  Her wrists were then placed in locking leather cuffs with mittens behind her back and locked together.

After this, she was gagged with a leather penis panel gag which buckled behind her head,   Leather straps held her ankles and knees together and her big toes were tied together with thin, tough cord. 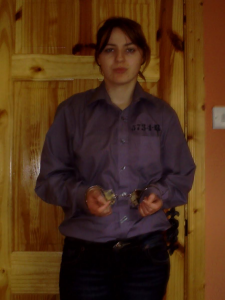 Already beginning to perspire, she was astonished to see that she would be passing the next 7 nights securely laced into a leather sleep-sack.  This particular sack had been obtained from the male gay community and in addition to the ultra-tight lacing, it had a 3-inch collar at the throat, a thick band at the waist and at the ankles.

A heart-rate and breathing monitor were plugged into the sack to ensure her safety before the kid-leather helmet was tightly laced at the back of her head, form-fitting to her face.

She instantly would become burning hot with the plastic and pressure of the leather enclosure and would be sealed in agony for a full 12 hours, from 8:00 PM to 8:00 AM.

For a full seven nights she endured this agony, which was her lot as prisoner.

In addition to all this, I do have a report that special punishment blouses have been ordered, and she will spend her days in strict elbow-ties and and sever strappado, struggling against the severe itching from her throat down through her ankles.

Photos of this prisoner, 5734-R may be limited in the future.