We have set up for release 42 three minute video conversions of 8mm Kodachrome film, that has been remastered to HD video on the subscriber site for Archives BBS.

Some of you may remember that there was a lot of uncertainly in the video market in the late 1970’s.  Sony Betamax and VHS were battling it out, and the inferior VHS won out.  For the first several years of 1980’s Video Cassette Recorders, as they were called, were in excess of $5,000.

After it became clear that VHS was the winner, the VCR prices dropped below $1,000 and I felt like I could afford one in December, 1982.

Now, prior to that time, I was taking video in 8mm (Super 8) Kodachrome.  No sound, of course, and you would send the exposed film off in a mailer for processing, but believe it or not, the image projected was colorful and really kind of sharp.

That was over 25 years ago.  I didn’t name this system “Archives BBS ” for nothing!

I recently invested in having this film scanned to HD MPG format, and ended up with 2 hours of rare footage.  The project had all kinds of problems from a technical standpoint, but I worked through them.

There were not a lot of people hiring young women, and photographing them with their wrists and elbows tied behind their backs, and I’m glad that these have seen the light of day.

This pretty secretary at a pool company did a shoot in 1982, right before the advent of easily obtainable video cameras! She is wearing a polyester business blouse, and is locked in black handcuffs, behind her back.

One of the notable things about these video clips is that they are in color.  Kodachrome, known the be the finest film ever, was the medium of these 8mm films and the color has remained for the most part stable as this footage languished in multiple reels at the bottom of a box in a storage locker.  I’d say it’s definitely superior to VHS and the way it looks.

Pretty secretary is tied up in the Jelly Jacket she wore every day to work! 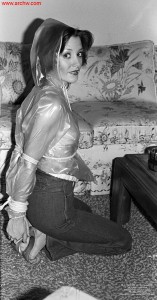 Whitney wore this cute clear plastic Jelly Jacket every day to work, and she got a lot of compliments on it! I asked her to wear her bra underneath it, and tightly tied up her wrists and elbows. You can see this in color at Archives BBS Member site.

Back then, I developed my own Tri-X film in Dektol, Stop Bath and Hypo (remember anyone?) and I never took color images until the first “official” Archives BBS shooting of Diana on February 22,1994.

So, these video clips are the only color footage of these young women in bondage, and I have to regard that as a desirable thing.

I hope you enjoyed this article.  The MPG video files I am speaking of will be uploaded to the Archives BBS over the coming months, interleaved with other content.

As always, your comments/questions are welcomed!