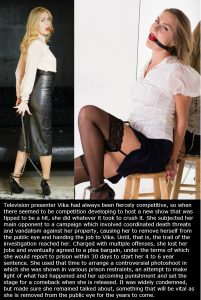 Television presenter Vika had always been fiercely competitive, so when there seemed to be competition; developing to host a new show that was tipped to be a hit, she did whatever it took to crush it!

She subjected her main opponent to a campaign which involved coordinated death threats and vandalism against her property, causing her to remove herself from the public eye and handing the job to Vika (@vika_model). Until, that is, the trail of the investigation reacher her.

Charged with multiple offenses, she lost her jobs and eventually agreed to a plea bargain, under the terms of which she would report to prison withing 30 days to start her 4 – 6-year sentence.

She used that time to arrange a controversial photo shoot in which she was shown in various prison restraints, an attempt to make light of what had happened and her upcoming punishment and set the stage for a comeback when she is released.

It was widely condemned but made sure that she remained talked about, something that will be vital as she is locked away and removed from the public eye for the years to come.