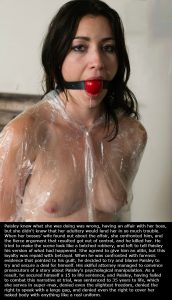 Paisley knew what she was doing was wrong, having an affair with her boss, but she didn’t know that her adultery would land her in so much trouble. When her bosses’ wife found out about the affair, she confronted him, and the fierce argument that resulted got out of control, and he killed her. He tried to make the scene look like a botched robbery, and left to tell Paisley his version of what had happened.

She agreed to give him an alibi, but this loyalty was repaid with betrayal. When he was confronted with forensic evidence that pointed to his guilt, he decided to try and blame Paisley to try and secure a deal for himself. His skilful attorney managed to convince
prosecutors of a story about Paisley’s psychological manipulation.

As a result, he secured himself a 15 to life sentence, and Paisley, having failed to combat this narrative at trial, was sentenced to 35 years to life, which she serves in super-max, denied even the slightest freedom, denied the right to speak with a large gag, and denied even the right to cover her naked body with anything like a real uniform.