Angelica felt that she had triumphed by having only her wrists restrained, and then only in front of her as she was lead off by the prison officers. Her mind was changed when she saw the dingy army-green vehicle in which she was to be transported. Her arms were held tightly as she was lead to the back where the door was unbolted.  The woman gripped her hair tightly, and the man stepped into the van and emerged with a human body length canvas bag.

Angelica instantly knew its purpose, and she shouted “No”, but it was to no avail. The bag was instantly sacked over her head, and over her protesting handcuffs and taken down to her ankles and belted shut. There was an opening for her head, and when her black curls had found their way through, a belt was tightened around her throat. 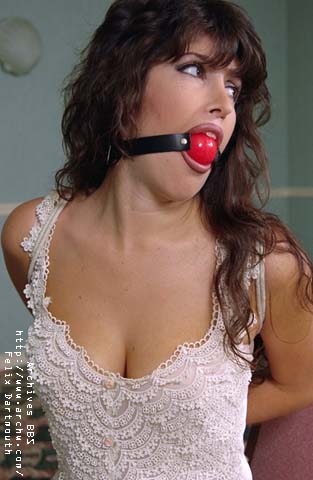 Angelica – a Woman Imprisoned in Bondage

Screaming, Angelica was lifted into the van and taken into one of the small lockers that were on either side of the van. A dim bulb was at the top of the three by three footlocker, and Angelica, bagged in this canvas body sheath was clipped by two points to the sides of the locker, and then a strap was tightened around her body, pinning her wrists to her sides and preventing her from removing the small tight clips that Jim had placed on her nipples.  She was now a captive female.

Alexis, with her wrists bound behind her back, roped up to her shoulders, and ball-gagged – illustration inspired by An Easy Job, a bondage text file by Felix Dartmouth.  She then felt a metal brank lowered over her head and inserted into her mouth. The device

More adventures of Angelica and her companion Stacy in the exciting bondage story series “An Easy Job” are on the Archives BBS CD-ROMS.  Felix is still writing and publishes on his website as a public service.

The Complete text of “An Easy Job” is available as a Kindle Edition on Amazon.Com.