When young women are introduced to a world of wealth, privilege and luxury, there is often a price they must pay.

Specifications:  HD video 1920 x 1080 –  downloadable Mp4 format.  The complete program will be delivered in 4 MP4 files.  The length of the full program is 3 hours, 07 minutes.  A detailed time chart is found at the bottom of this page.

A brilliant young woman, Vika is aware of the elevated social and material status to which her relationship with a financially astute banker has taken her, and she’s not willing to give up her new-found prestige.  For him, the solution is simple; when he discovers an infraction by his protege, he sends her for a day with Marshal, to be subjected to cruel bondage!

(don’t miss this other great Vika release for 2019 – “Anonymous Bondage Witness 3 – with Vika“!

Vika arrives wearing a stunningly sheer dress without any underwear, no bra, and no panties, and is told to kneel.  She is fitted with a steel slave eternity collar which is screwed closed about her throat with a micro Allen wrench. 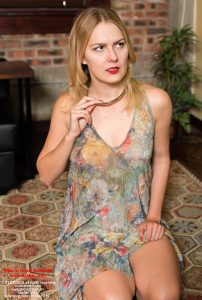 She protests as she is told to remove her dress, and her wrists are tied behind her back in a simple but sturdy takate kote.  It becomes clear that Vika is here for punishment not just at a whim of her master, but for just cause.  She is quite the chatterbox, trying to get a rise out of Marshal, but he just attends to his business and firmly fixes he beautiful charge into bondage.

Taking the lead rope from the back of Vika’s bondage, Marshal leads her over to the window and tethers her just far enough from the window where she cannot be seen from the outside. Seeing passersby on the street, she struggles against the tether to get close to the window, but those outside are unaware of the blonde beauty, with her wrists tightly tied behind her back and with even tight bands of hemp above an below her stunning breasts, pinning her arms captive to her side.

Protesting her treatment, this errant young woman is given a stiff belting on her butt!

After an hour frustratingly trying to gain the attention of the outside world, she is taken and tied with her wrists in front of her.  She must have thought that that was not quite so bad, but her wrists are pulled over her head, and a crotch-rope is formed down her butt, and up through to her waist.  Every struggle was immediately translated into a painful sensation in her most sensitive feminine area.

Her master had told Marshal that he had planned to take her to lunch and that she was to be delivered in bondage to the valet parking of the restaurant.  Marshal had been given her outfit; a secretary’s blouse, pencil skirt, and high heels with straps and dark hose with garter and stockings.  No panties, no bra.

Vika was humiliated enough with this uniform of a lowly recent graduate office worker, or perhaps an office to office saleswoman but her incense heightened as she was belted in cowhide and shacked in full female transport restraints!  Thus uniformed, belted, and hobbled in chains Vika was transported to a 1-hour lunch with her master.

On her returned, her humiliation was documented as her skirt was pulled up to reveal her puss, as she stood in her high heels in pain and in chains.

After stripping off her outfit, but leaving on her garter and stockings, Vika was manhandled into an excruciatingly complete set of bindings that formed her torso into an immobile unit.  She began to sense that something was coming up, and she was right.

She was taken into the bed, and a loop of rope was taken around one leg, then around her back, and tied to the other, wrenching her legs apart, spreading her sex for all to see!

Then came the gag.  It wasn’t enough just to have the silicone ball behind her teeth, but her mouth was packed with a sponge before the ball-gag was pulled in and tightened, preventing any movement of her tongue!

Finally, a plastic bag was taken over her head and tied about her throat, with a small air hole.  She could breathe, but each breath was a struggle with the thin plastic as she sucked it against her nose and mouth, cutting off her air!

Her strenuous position, her tightly bound arms, her spread and bound legs, the intense packing of her mouth, and the plastic bag over her head all combined for Vika to realize that she had been sent to the cruelest bondage she had ever experienced!

The minutes passed like hours as she struggled, gasping for air, and straining to find comfort in her several and many restrictions.  Finally, Marshal showed some mercy, pushing her forward and untying her legs.  She was able to sit on the side of the bed, but she was kept bound and in the gag packing and her head bag.

Vika, exhausted, was allowed to put on a nightgown, was handcuffed, and then was given a drink of water.  Kneeling in her sheer blue lingerie, and with her hands cuffed behind her back, she was allowed to eat a banana fed to her bit by bit by Marshal.

Her punishment in cruel bondage was not over, however.  She was told to put on her pencil skirt, and a plastic raincoat as a blouse, and was tightly tied up in a shibari arm-binder and required to stand in her high heels for an additional hour.

Sweaty and uncomfortable, Vika prevailed on Marshal to allow her to take a shower.  So, chained by her throat to the shower-head, Vika indulges in a thorough shower.  This is a treat to see, I can assure you.

Come and join Vika and Marshal as she pays the price of her luxurious new lifestyle by spending a day in cruel bondage!

Text from the preview file for “Vika in Cruel Bondage”

Consorting with privilege, power and wealth has its downsides, and punishment is not the least of these! After entering a world of wealth and luxury, Vika must endure the strictest and most humiliating punishment. So, don’t miss the nudity, the shibari, the crotch-ropes, the transport shackles, the man-handling, the packed ball-gagging, and the locked-down breaks in shooting! The “cruel punishment” from his video simply can’t be shown in this preview, so order now!